What is the Fibromyalgia Impact Questionnaire (FIQ)

The Fibromyalgia Impact Questionnaire is something that I encounter a lot when reviewing research into fibromyalgia as it is often used in studies to see how something affects a person's fibromyalgia symptoms. 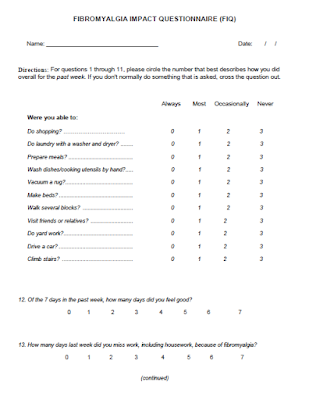 The Fibromyalgia Impact Questionnaire (FIQ) is an assessment and evaluation tool developed to measure fibromyalgia (FM) patient status, progress and outcomes. It has been designed to measure the areas of health that are believed to be most affected by FM. It is in the form of a two page questionaire with a further two pages of description and scoring. It is designed for the FM patient to fill out themself.

HOW THE FIQ WAS DEVELOPED.

The FIQ was developed for adults with fibromyalgia. Doctors used patient reports, functional status instruments, and clinical observations to create it.

The original Fibromyalgia Impact Questionnaire was developed in the late 1980s by Drs. Carol Burckhardt, Sharon Clark and Robert Bennett at Oregon Health & Science University in Portland, Oregon USA. At that time the clinical features of fibromyalgia were just being described, and the FIQ was an attempt to capture the total spectrum of problems related to fibromyalgia and the responses to therapy. The FIQ was first published in 1991 and since that time has been extensively used as an index of disease activity and therapeutic efficacy. Its development is described in separate reviews by Dr. Burckhardt and Dr. Bennett. Several issues regarding ethocultural usage, symptom relevance and arcane scoring became apparent and these issues have been addressed in the revised version FIQR. ~ American College of Rheumatology

WHAT THE FIQ MEASURES

It measures physical functioning, work difficulty, including housework, morning tiredness, pain, stiffness, fatigue, and well-being including depression and anxiety, over the past week.

HOW THE FIQ IS SCORED

There are 20 questions in total. The first 11 relate to physical functioning and are rated on a 4 point scale. Most of the other questions use a horizontal linear scales marked in 10 increments on which the patient rates how they felt overall.

The FIQ is a useful measure of disease impact in patients with fibromyalgia. It has shown good responsiveness to change in clinical studies.

It is a useful instrument for measuring the changes in groups of patients in treatment programs and clinical trials.  Whether it is beneficial for helping individuals and their health care providers plot changes as a result of individual treatment has not been formally tested but many clinicians use it for that purpose. ~ Dr. Carol Burckhardt. 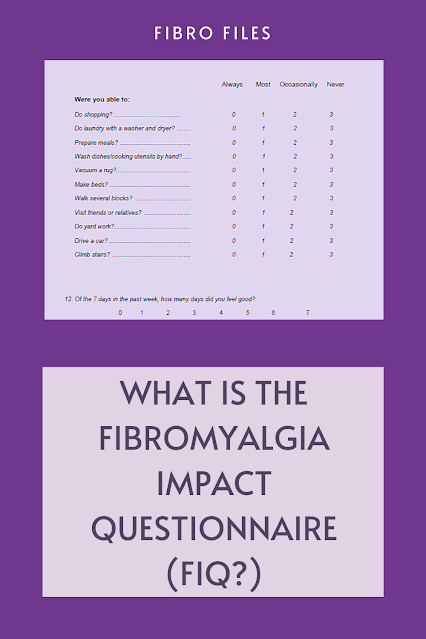