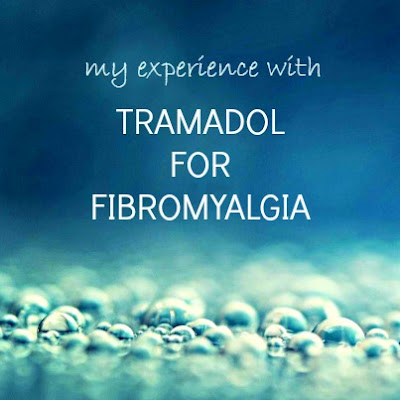 Hi! this is all about my experiences with tramadol, both on it and coming off it. You can watch my video on this topic or read the transcript below it. Don't forget to read some of the comments where you will get a wider understanding of tramadol for fibromyalgia from many people.


TRANSCRIPT:
When I started taking this medication it was explained to me that it needed to be taken at a regular time once a day and that I would probably have nausea at first for about a week and to make sure to take it with food. I did as prescribed and sure enough I had nausea for one week and then it subsided.

I used Tramadol regularly for a long time and it did relieve the pain and helped me to lose a little weight but it also helped me to lose interest in life.  The main reason I lost weight was that I had no interest in food or in cooking or in looking after myself. I became like a drug addict but did not realise it.

One day after about a year my daughter said she felt like she had lost her mother - she cried and said I was behind a cloud and she could not get to me. This made me realise that I was just sitting on the lounge all day doing nothing and I decided to stop taking Tramadol.

At this point I made a very foolish mistake and decided to go cold turkey. OMG I experienced 7 days of extremely bad withdrawal symptoms the worst of which was the muscle pains and irritability. There was also watering eyes and a runny nose like a bad flu, nausea and sweating and shaking all over. These are all known symptoms if you suddenly stop using this medication but obviously, because of the drug itself, I was not thinking right when I made the decision to just stop taking it without consulting my doctor. He would have told me to come off it slowly in increments.

In retrospect I could see that the Tramadol was causing major drowsiness in me. When it was completely out of my system I realised that many of the symptoms I had started taking it for had gone - that is the nature of Fibromyalgia, I think, it changes all the time.
Also I feel it is essential to remind you that when taking any medication, especially long term, that you should be made aware of the possible side effects.

"When choosing between equally effective analgesics, relative safety is important. In the case of tramadol, adverse effects are common and sometimes serious. Tramadol binds weakly to opioid receptors, so at normal doses constipation and respiratory depression occur less frequently than with opioids. However, these effects can, and do, occur at higher doses. Tramadol is metabolised in the liver and excreted by the kidneys, so doses should be adjusted in patients with impaired liver or kidney function, and in the elderly." ~ NPSMEDICINEWISE

Side effects associated with use of Tramadol, according to RxList, include the following:

If your medical doctor is using this medicine to treat your pain, your doctor or chemist may already be aware of any possible drug interactions and may be monitoring you for them. Do not start, stop, or change the dosage of any medicine before checking with your doctor, health care provider or pharmacist first.

Severe Interactions of Tramadol Include:

You might also be interested in reading my experiences with Cyclobenzaprine for Fibromyalgia and all the natural treatments I have tried.

There are many interesting comments below that show people's differing experiences with tramadol for fibro. I hope you have time to read some of them.
Posted by Good at 5:18 PM