Tinnitus, or ringing in the ears, is something I have lived with for over 20 years but never realized it was connected to fibromyalgia.  In this post I share how tinnitus feels to me and what I have discovered about tinnitus in fibromyalgia. 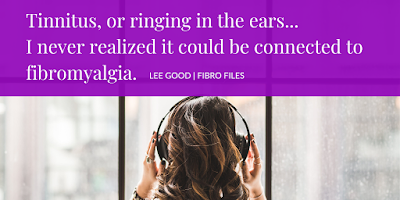 Tinnitus isn't a condition itself — it's a symptom of an underlying condition, such as age-related hearing loss, ear injury or a circulatory system disorder. MAYO CLINIC

Tinnitus involves the sensation of hearing sound when no external sound is present. Tinnitus symptoms may include these types of phantom noises in your ears:

The phantom noise may vary in pitch from a low roar to a high squeal, and you may hear it in one or both ears. In some cases, the sound can be so loud it can interfere with your ability to concentrate or hear external sound. Tinnitus may be present all the time, or it may come and go.

My Experience With Tinnitus. (originally written in 2009)

Listen! There are a thousand chirping birds in my head most nights. In the day they reduce to a high pitched group of crickets singing in unison. I am a nature lover but this is ridiculous.

Some people might think it would be lovely to listen to these constant companions but I wish they would get out of my head and leave me in peace and quiet. They are sometimes so loud it is difficult to hear other things like what the children are trying to say to me.
I think people who have tinnitus may become lip readers without really knowing it. I noticed this when a new doctor was speaking and I had to work really hard to listen as I could not read her lips - she had a strong accent which makes lip reading difficult to the novice. I have only had tinnitus constantly for 6 years now. It is just added to my list of symptoms and no doctor (in the many that I see) has ever investigated it further.
To tell the truth it is only really annoying on those nights when I cannot get to sleep easily and I lie there listening to the sound of a thousand chirping birds...
What I have found over the years is that the tinnitus is not getting worse. At first it seemed loud but my brain adjusted to it. Apparently I had “habituated” to it. My brain had decided to stop monitoring the sound. It was still there but it did not come to the foreground often.
Over the years I have noticed that certains foods make the tinnitus get louder for a period of about one day and then go back to it's "normal' level. For me those foods are salt, MSG and salicylates. I have always had food allergies though and the last two are part of those. This would not be the same for all people who have tinnitus.
I have also found that wearing headphones or earplugs is not pleasant as it make me focus on the ringing sound. Also loud music is an annoyance. This seems contradictory, as you would expect that someone with tinnitus does not hear loud music as clearly as someone without it but many people with tinnitus, including musicians, have remarked on this same experience.
What I have found out about Tinnitus and Fibromyalgia.
People with fibromyalgia are 4.5 more likely to suffer from hearing loss than other people, according to a Norwegian study.
A 2013 study tried to work out how fibromyalgia and ear problems are related. The researchers came to the conclusion that onset of ear fullness may be associated not with abnormal findings in the middle and inner ear function tests but with other causes, such as central desensitization. This is when you have  an overly sensitive nervous system. This nervous system is never truly at rest both in tinnitus and fibromyalgia. This maybe why fatigue is reported in people with both conditions. 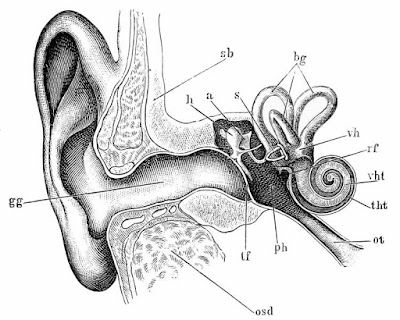 A 2020 study found that  fibromyalgia influences hearing loss and is in line with the hypothesis that the FM mechanism is related to a central nervous system abnormality in sensory processing. Due to these findings doctors should be screening for the risk of hearing loss in people with fibro.
The ear has 20,000-30,000 hair cells, the nerve endings responsible for carrying the electrical impulses through the auditory nerve to the brain. This is a complex system. There is much that the world of science has yet to discover about the inner ear and it's connection to the nervous system, tinnitus and also fibromyalgia.
Recommendations for those with tinnitus.
Do not presume that your tinnitus is caused by fibromyalgia as there are so many other reasons that you could have ringing in your ears. I highly recommended that you visit an Otologist (ear doctor) or Audiologist (hearing specialist) to make sure it is not the result of a serious medical problem.
Here is the recommendations from the very thorough 2019 European guideline for tinnitus: diagnostics, assessment, and treatment Criteria for assessment and treatment of tinnitus. 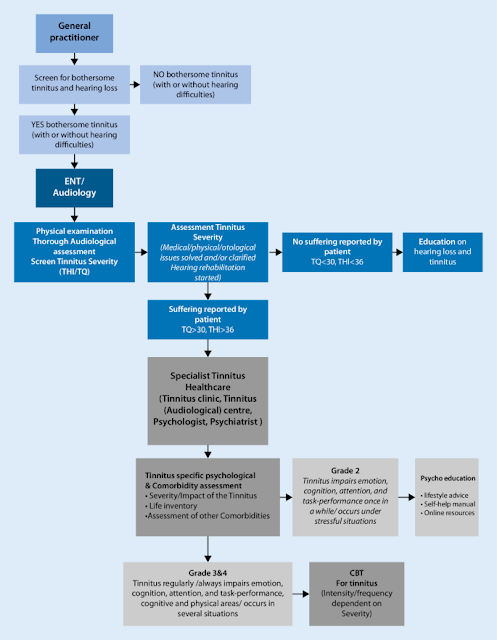 Do you have tinnitus? Do you know the cause of yours? I would love to hear from you!
Also if you have a different kind of tinnitus with a whoosing sound you need to check out Katie's post about pulsatile tinnitus here. 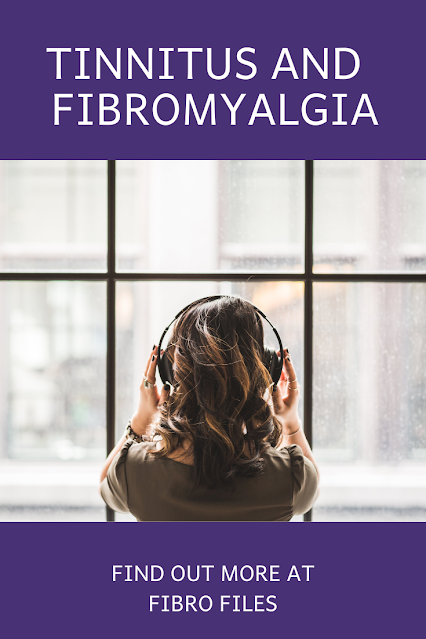